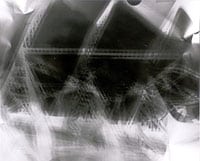 There’s something about Sigur Rós that invites – shall we say – asymmetrical eyebrows. An unpronounceable album called ‘( )’ sans either tracklist or artwork; songs with lyrics in a nonsense language called ‘Hopelandic’; a song called eighteen seconds before sunrise consisting of eighteen seconds of silence; a professed aversion to publicity; and a cultivated enigmatic, capitalising on the elemental/mythic – the poetics of that explosive interface between the volcano and the glacier – that particularises Icelandic culture. They have flirted with pretension in a shamelessly winsome way since the beginning, and continue to get away with it because, first, for each one of us who might be tiring a little of the tease, there are ten who have just discovered the glory that is Ágætis Byrjun – one of the outstanding albums of the last ten years – and, more importantly, ‘pretension’ presupposes insubstantiality – a fart in a bubble – and SR’s music has more substance in it than a random thousand of the Q queue of posing pretenders.

Ba Ba … is a studio mastered version of a semi-improvised performance given in October 2003 in New York, and again in December 2003 in Paris, when SR and Radiohead accompanied a new dance piece – Split Sides – by the Merce Cunningham Dance Company. Split Sides was made up of two alternative pieces of choreography, costume and set design, and music. The way the elements were put together was decided on the night by a roll of the dice.Cunningham’s entire nigh-sixty-year choreographic career has been concerned with exploring such notions of randomness. In his work, the choreography is developed independently of the music so that any perceived significance in the performed relationship between the music and the dancing is the result of chance, not design. Together with his late long-time partner, the composer John Cage, he is also known for working with eccentric sound-sources. Dancing to an amplified miked cactus was typical.SR entered into the spirit of this occasion with unexpected and charming aplomb: they improvised a 20-minute section of music over a previously recorded backing track using two sheet-fed music boxes, a glockenspiel and a specially homemade percussive instrument (dubbed ‘bummsett’ in Icelandic) comprising eight ballet shoes on a rack. The backing tracks incorporated recordings of Merce Cunningham’s voice and the sound of his tap-dancing feet, as well as the sounds of the dancers’ footfalls, recorded at the Company’s studio in Manhattan.

The Cunningham/Cage homage continues, in this EP (first released as an iTunes mp3 download), in the (tongue-in-cheek?) suggestion that the three sections can be played in any order (thus perhaps laying claim to this being the first mp3 release to consciously incorporate the iPod shuffle as a creative device). This works up to a point, in that each part begins and ends in a similar way, so that any end will dovetail, theoretically, with any beginning. Having dutifully tested half of the six possible permutations, though, I have to say that the default order (ba ba – ti ki – di do) isn’t seriously improved by the shuffle, and that this betrays the kind of unedited art-school gimmickry that little princelings tend to get indulged in, and is neither illuminating nor original (sorry guys – Eric Satie was doing random shuffling in 1910).

What begins as a querulous, fragile, bottom-of-the-glacier piece, quite unlike the widescreen epic soundscapes of ÁB or ( ) – (this is more like Björk flitting about in one of her wonderful glittery fairy dresses trying to decide between Fourtet and Mike Oldfield) – takes the same basic thematic components on a chilly ride through three quite different and progressively more complex environments. Each section conforms, though, to a familiar SR template of letting a deceptively simple sonic idea expand, slowly and delicately, to define a particular aspect of the shared space, and then, just when you thought that was it, adding a final element that transforms it utterly. It’s a breathtaking formula, like adding a drop of scarlet dye to a bowl of milk. And in di do there’s further embellishment to the embellishment, in that there’s a noisy middle section consisting of a sudden and unexpectedly violent aerobraking skim through some Heaviside layer of the unconscious where fragments of an impenetrable monosyllabic language orbiting in this electronic limbo are randomly scooped up and injected into a cascading multirhythmic collage where the background of the tinkling, whirring music box provides the only stable point of reference.

Ba ba ti ki di do. What’s to be made of those syllables is anybody’s guess. “Left a bit – right a bit – steady – d’oh!” in Aztec, maybe. It hardly matters. Judged simply as what it was – a near-busk around a set of deliberately imprecise performance parameters – it’s brilliant. Its continued life on disk (after being given a lick and a polish in their Sundlaugin studio by Biggie the Gus Gus genie) occupies a significant moment of transit between these past few friendly indie-years with Smekkleysa and Fat Cat and the scary future in thrall to the men in suits at EMI, to whom they signed earlier this year. Under EMI’s auspices they are due to provide the first of three contracted albums in the autumn of 2004. This refreshing little EP might well be remembered as both a toodle-oo to the astonishing variety and fertility of this early period and a hey to mainstream global dominance and endless slightly varied reiterations of best-selling tracks, cynically referred to as the Coldplay effect. Or not. Fingers crossed.